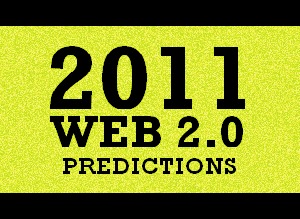 There’s never been a more exciting time to be a web designer; but being a member of this fast-paced, persistently metamorphic profession, I’ll probably end up saying this at the end of every year until I retire.

But with the web design industry abuzz with new specifications like HTML5 and CSS3, and cutting-edge frontiers like the mobile web, I can’t help but wonder what the future will look like in the new year. Here are four predictions for the future of web design.

The mobile web has been the dominant subject in web design for the past 2+ years. A quick peek at Dribbble, a social media site where designers share their projects, will show you that many of us are working on mobile device apps and interfaces.

However, it’s still safe to say that most websites have given little to no attention to their mobile web presence. Most of the innovative mobile device web designs we’re seeing are on big, industry-leading, tech-centric sites such as Amazon.com, Google (Google), and Digg (Digg), or niche sites targeted toward web designers (such as A List Apart).

Where we’re not seeing mobile web design implementations are in run-of-the-mill company and corporate sites. Small- and medium-sized businesses, Fortune 500 companies, and government websites are sadly falling behind instead of in line.

However, companies are beginning to see the rewards of meeting the needs of mobile device users. In the years to come, there will be a significant shift in attention toward the mobile web presence in all websites.

There are already several mobile web tools you can use for creating a mobile web version of your site; it’s time companies seriously look into implementing these cost-effective and relatively simple solutions as either a stop-gap solution or a permanent one.

2. Web Design as a Profession Will Become Specialized

Web designers are increasingly contending with many roles and tasks. What used to be just HTML, CSS and designing static brochure sites for the desktop has extended to designing web-enabled solutions for mobile devices, web apps, rich Internet (Internet) application (RIA) interfaces, content management systems (CMS) and much more.

We’re tasked with making harmonious designs that carry a website’s brand across all platforms and situations — designs that establish the company’s brand whether it’s being viewed in a 28-inch desktop monitor or an Android (Android) smartphone.

This leads to two things. Job security is one, but the other is the need to distribute these tasks so that we can specialize and excel in one specific area.

Just as the profession of being a doctor and the field of medicine are branched out into sub-fields such as oncology, dentistry and neurology, we may see a similar division in the field of web design. I can see specializations such as mobile web designer, content management system designer (with further sub-specializations such as WordPress (WordPress) theme designer or Drupal (Drupal) theme designer), and RIA interface designer becoming a reality and being in demand as we move forward.

There’s been a sweeping trend in the way new websites are being visually designed. Web designers are forgoing complex visuals and overdone design techniques, opting instead for clean and simple web designs with a high attention to detail, a greater emphasis on typography — with the help of web fonts and the upcoming open web font format (WOFF) specifications — and stronger interaction design for richer and more captivating user experiences.

Not only that, but simpler aesthetics means lighter web pages, which translates to a better experience on mobile devices where Internet connectivity is lower in speed and less reliable when compared to the traditional broadband connection, and where screen sizes are too small to fit excessive design elements. This web design trend of “less is more” seems like it will extend, if not dominate, the aesthetic tastes of web designers in the near future.

Print designers are typically tasked with brand identity design, such as logo design, letterheads, business cards and other print materials.

However, companies are seeing the great opportunities and effectiveness of business networking online. Businesses are a lot more concerned about their brand’s visibility on the web. Business cards are being replaced by social networking profiles on Twitter (Twitter) and Facebook (Facebook). Newsletters, brochures and company letterheads sent out by snail mail are being dismissed for HTML e-mails and e-newsletters.

Where Do You See Web Design Heading?