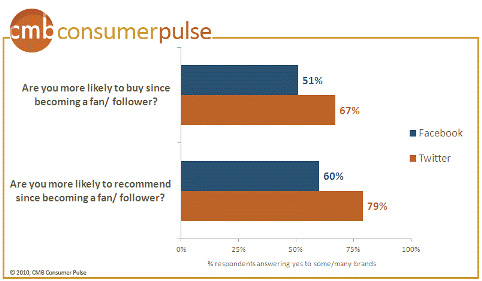 A new study shows that those who are fans or followers of a brand on Facebook or Twitter, respectively, are significantly more likely to buy products and services or recommend the brand to a friend.

Of course, those findings might be a bit overstated — many people actively seek out the brands they’re already fans of and follow or fan them on Twitter and Facebook. But there’s still much to be said for the mindshare that engaging those existing brand enthusiasts on social media sites creates, in turn keeping them active. Plus, the study also found that many consumers across a wide variety of demographics have negative perceptions of brands that aren’t using social media.